Mons. George Frendo is Chairman of the IRCA for 2020 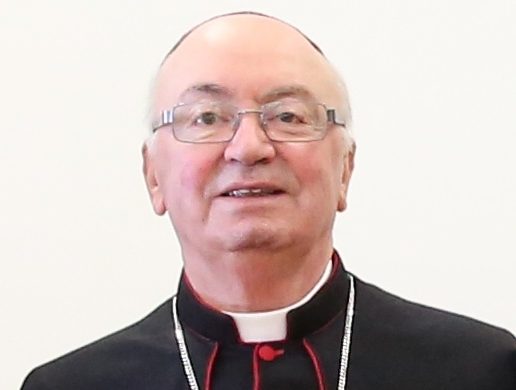 Mons. George Frendo is Chairman of the IRCA for 2020

According to the Statute of the Interreligious Council of Albania, article 12, point a, which states, "The Presidency Council shall appoint the Chairman of the Presidency Council every year according to the rotation formula..." On 22.10.2018, decision no. 2 has been approved the rotation schedule of the Chairman of the Interreligious Council of Albania for a period of 5 years, where for the period January 1, 2020 - December 31, 2020 will be the head of the Albanian Catholic Church Mons. George Frendo (President of the Episcopal Conference of Albania and Archbishop of the Archdiocese Tirana-Durres), who comes after His Beatitude Anastasios Janullatos, Archbishop of the Autocephalous Orthodox Church of Albania).

During the Interreligious Council Presidency Board meeting on January 16, 2020, Mons. Frendo has assumed the office of his predecessor in this task, His Beatitude Anastasios Yanullatos, Archbishop of the Autocephalous Orthodox Church of Albania.

Who is Mons. George Frendo?

Mons. George Anthony Frendo was born in Qormi, Malta, on the 4th of April 1946. He is the fifth of seven children. After he finished his elementary and high school in the year 1962, he joined the Order of Preachers (Dominicans). Next he followed the studies of Philosophy and Theology at the Philosophical-Theological College of Saint Thomas Aquinas in Rabat, Malta. He was ordained priest on April 7, 1969.

At the College of St. Thomas in Rabat he graduated as Lector in Theology with his thesis Baptism as the Sacrament of Faith in the Doctrine and Practice of the Church. He continued his studies at the Pontifical University of Saint Thomas Aquinas in Rome, at the Faculty of Canon Law and in the year 1973 he graduated as doctor of Canon Law defending his thesis Indissolubility and Divorce in the Theology of Thirteenth Century Scholastics.

On his return to Malta he immediately started to teach Dogmatic Theology at the Philosophical-Theological College of Saint Thomas Aquinas of the Dominicans. He also taught several courses of Dogmatic Theology (on the Sacraments, Christology and Eschatology) at Faculty of Theology in Malta as well as a course on Contemporary Atheism in the Seminary on the island of Gozo (Malta).

In Albania he taught Theology of the Trinity and Christology at the Interdiocesan Seminary in Shkodër.

OFFICES in the ORDER of PREACHERS

1992-1996: President of the Conference of Major Superiors in Malta

OFFICES IN THE ARCHDIOCESE OF MALTA

1974-1980: ‘Defensor Vinculi’ (Defender of the marriage bond) in the Church Tribunal

Member of the Committee created by the Episcopal Conference of Malta on the elaboration of complementary norms after the promulgation of the new Code of Canon Law.

1997-1999: Charged by the Episcopal Conference of Albania to elaborate complementary norms after the promulgation of the new Code of Canon Law.

1998-1995: Vicar General of the Archdiocese of Tirana-Durrës

1999-2005: President of the Conference of Major Superiors in Albania.

2001-2006: Member of the Council of European Major Religious Superiors.

On 23rd of September 2006 he became Auxiliary Bishop of Tirana.

In 2007 he was nominated member of the Pontifical Council for the Interreligious Dialogue.

In May 2012 he was chosen to be the Secretary General of the Episcopal Conference.

On December the 3rd 2016 he was proclaimed Archbishop of Tirana-Durrës.

On February the 5th 2018 he was elected President of the Episcopal Conference of Albania.

From January 2020 until the end of 2020 he will chair the Presidency of the Interreligious Council of Albania.

He is the author of several books of doctrinal and spiritual nature, in Maltese, English and Albanian. For example the Eucharist, the Sacraments, the Blessed Virgin Mary, three books with catechesis for the three years of preparation for the great jubilee of the year 2000, the family, contemporary atheism, a compendium of the Catechism of the Catholic Church, Eucharistic adorations, etc.

He participated in many international encounters, as the provincial of the Dominicans in Malta, as the president of the Conference of Major Religious Superiors in Malta and in Albania, as member of the General European Council of the Higher Religious Superiors and also as Secretary General and then as President of the Episcopal Conference of Albania. 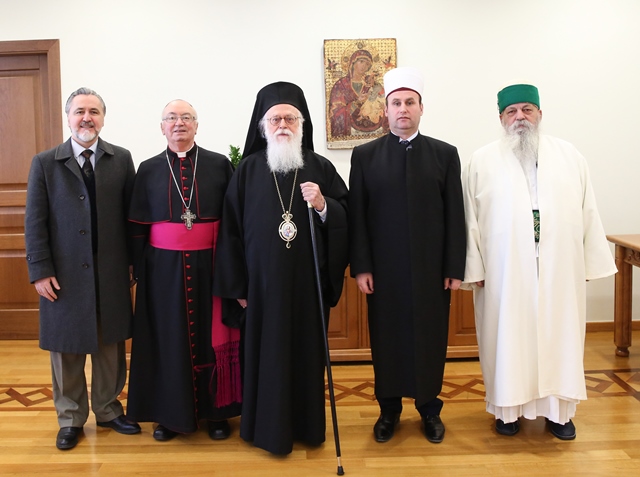 This message is only visible to admins.

Error: Error validating access token: The user has not authorized application 1332798716823516.
Type: OAuthException
Solution: See here for how to solve this error

On the occasion of the 10th anniversary of World Interfaith Harmony Week, the Department of Women and the Department of Youth at the Interfaith Council of Albania organized today, on February 22, 2020, a socio-cultural activity with orphaned children in one of the key areas affected by the November 2019 earthquake in Albania. During that time thousands of people were affected economically and psychologically by the devastation caused by the earthquake, where the most affected were the orphan children of one of the areas that needed not only economic but also social and psychological support, such as the district of Kurbin.
In this regard, Muslim and Christian women and youth took the initiative to organize a social and cultural activity, where besides the festive activity, children were given books, gifts, and a lunch with leaders and representatives of religious communities in Albania.
This is the first activity of its kind, where through the Interfaith Council of Albania, which is co-chaired by five different religious communities, young people of all faiths come together, activists of the IRCA in such interfaith cooperation, which will continue to find application in other social and humanitarian activities for orphaned children. … See MoreSee Less